Vickie Beard Thompson
Just to tell you a little about myself, my name is Vickie and I was born and raised in Kentucky. The majority of my ancestors have been in Kentucky since the 1790’s. I have always loved history, a good mystery and puzzles and that is what Family History Research is all about. As a child we would take day trips on Saturdays and head down some dirt road looking for old cemeteries. A lot of the time we weren't looking for anyone in particular, we just like to read the epitaphs. We would have a picnic lunch packed and have lunch at whatever cemetery we were at. If the weather was bad my Dad and I would go to a courthouse and dig through old records in musty old basements looking for our ancestors. So as you can see I have had an interest in Family History for quite some time.

Since my grandmother, my Daddy’s, Momma’s birthday was this month I decided I would write a little blog post to observe her 122nd birthday.

Jessie Holeman Doss was born 5 March 1899 in Clay, Webster County, Kentucky the daughter of George Samuel Doss and Nancy Lougena Woosley.  She was the eighth and youngest child of her parents.  She was spoiled rotten by her brothers and sometimes even by her sisters.  When Mama Jessie (as almost all of her grandkids called her) was three years old her family moved to Charleston, Missouri.  They lived in a tent while her Daddy, was cutting timber and she told of snakes that were all over the place.  She said you could not hardly go anywhere inside or out without stepping on a snake they were so numerous.  She recounted this story many times to my Daddy and to myself.  The following picture if of Mama Jessie in the middle and her sisters Annie & Verlie. 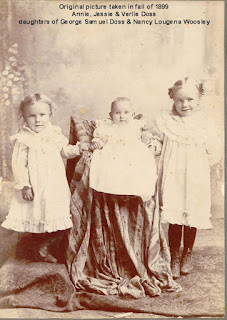 She did not go to school until she was about 7 or 8 years old because her Mom would not let her, this school was in Clay, Kentucky.  She hated school did not like it at all.  The last school she went to was at Wheatcroft, Kentucky and she only went to 5th grade then quit and never went back.  Her nickname was Judy, which her brother, George bestowed on her. 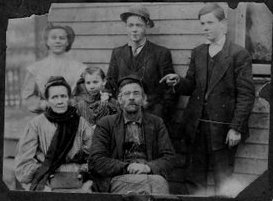 I wish Mama Jessie were here to tell me more about the story of her life.  I also wish I had written down all the stories she use to tell me.  About all I can do is try and remember some of the things she told me, and I have been told over the years by her children and other family members.  Mama Jessie was very superstitious and a couple of her things that I remember the most are, whatever door you come in, that is the door you leave out of, and do not put a baby in front of a mirror before they are a year old or they will die before they were 21 years old.

As a child we went and visited with Mama Jessie and Pa Corley quite frequently in their little house on Clay Street in Marion, Kentucky.  I well remember the front porch and the swing hanging there.  I spent many of my childhood days swinging in that swing.  Pa Corley would usually be setting in his rocker chair on the opposite side of the porch, smoking his pipe.  If we were being good and not to loud, he would start telling us stories.  My favorites were about Uncle Lug and Aunt Pootie, a made-up family, from his very vivid imagination.  If we happen to be there visiting during the week, we had to be quiet and stay outside so Mama Jessie could watch her soaps.  She was a stickler about those soaps. J  Another thing about their house was it had a tin roof and I would sleep so well when it was raining and pattering on the roof tops.  The following picture is of me with my Daddy and Momma on Mama Jessie's front porch.  That porch had a lot of changes over the years, with steps in the front and then changed to the side a few different times. 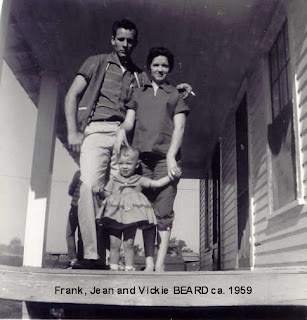 I am only 63 years old, but Mama Jessie did not get an indoor bathroom until I was almost 16 years old.  There was a path out the back and a Sears and Roebuck catalog if we were lucky. J  At night she kept chamber pots under the beds so that you did not have to go down the path in the dark or the cold for that matter.  I seem to remember that it was a two holer, so you could have company while you were going if you so desired. J  I remember my Daddy telling me that when they ask her if she wanted them to put a bathroom in the house, her answer was, “I don’t want one of them stinky things in here.”  It took some convincing to get her to agree to indoor plumbing and that it would not stink like the outhouse down the path.

Mama Jessie always wore a house dress when she was home that had two big pockets on the front.  One pocket always had Kleenex in it and the other carried small change.  When I was young, we would get a nickel if we gave her a hug and a kiss on the cheek when we were leaving to go back home.  As we got older it went up to a dime and eventually, we got a whole quarter.  We lived up in Henderson about 70 miles north of Marion and on the way back home we passed through the small town of Sullivan in Union County, and right in the bend in the road just passed the railroad tracks was a little restaurant that sold ice cream.  Daddy would always stop and that change we had gotten from Mama Jessie went for ice cream to eat the rest of the way home.  We sure looked forward to that ice cream every visit.  Mama Jessie in one of her house dresses in front of her house there on Clay Street. 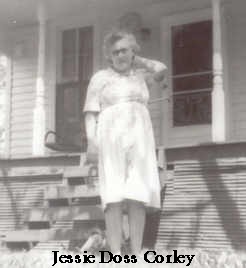 Mama Jessie and Pa Corley made their own lye soap and as I got older, I got to help stir the big cast iron kettle over the open fire in the backyard.  The kettle hung from a big tri-pod and man was that some hot work.  Mama Jessie saved all the drippings from bacon, sausage, and other meats to use in the making of that lye soap.  I do not know that as a kid we ever had store bought shampoo, because my Momma always washed our hair with bars of lye soap that we had gotten from Mama Jessie.  After Mama Jessie died, my Daddy was there at her house with some of his siblings and they were going through her things and cleaning the house out.  There by the kitchen sink in the window sill was her little soap dish with a bar of lye soap still in it.  She died in 1984, so as you can see, she was still using lye soap for washing up.  My Daddy brought me that soap dish and that piece of lye soap for me to have as a remembrance of my time helping them make that soap.  That dish and soap are on my desk as a reminder to me of how things use to be when I was just a kid.  The following are a couple of pictures of that soap dish with the lye soap. 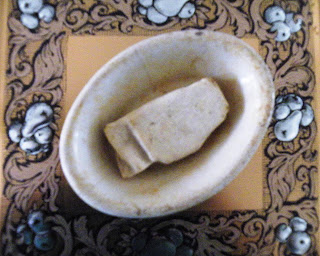 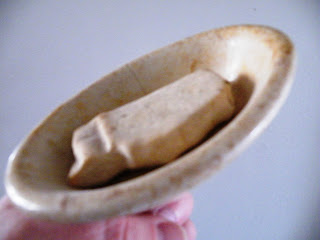 Mama Jessie was married five times, first to William Ernest Teague in 1919; next to Burke Atwood Ward in 1921 for about two or three weeks when she found out he already had a wife and several children in Louisiana.  I do not know if the marriage was annulled or if there was a divorce.  Mama Jessie was living in Kansas City, Missouri when she found out he was a bigamist.  This info was given to me by my Aunt, Helen Beard Loftis, Mama Jessie’s oldest daughter.  Her third marriage was to Benjamin Franklin Walls in 1923, fourth to my grandpa, Aubrey David Beard in 1925, then her fifth and final marriage to Veldo Thomas Corley in 1943, who we all called Pa and loved dearly.

Mama Jessie always insisted she was born in 1900, but the 1900 census indicates she was born in March of 1899.  I guess she just felt that being born in the 1800's made her seem too old.  One of the reasons we all called her Mama Jessie was because she did not think she was old enough to have grandchildren and she never wanted to be called grandma or any other obvious variation.  Apparently, she did tell the truth to the Social Security because they have her listed as being born in 1899, but she had her tombstone made quite a few years before she died and had 1900 put on it. 😀The following picture is of me with my youngest daughter and her family, when we stopped by to see Mama Jessie and Pa Corley this past October. 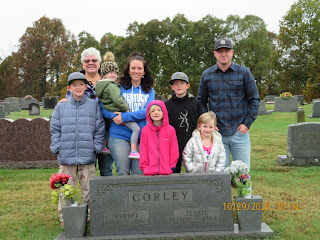 Mama Jessie was one of a kind, to say the least and she will be remembered for many years to come, as we her descendants, tell our descendants about her and the stories we remember.  Just a few pictures of my Mama Jessie, the one of her setting on the fence in the barnyard is probably my favorite. 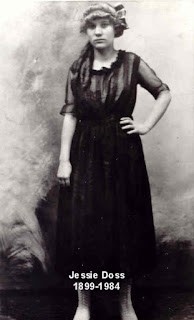 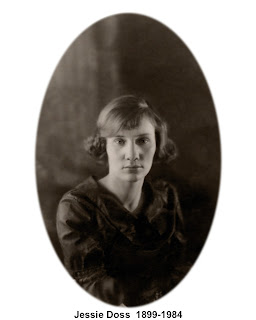 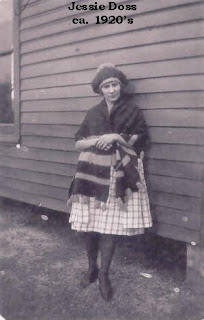 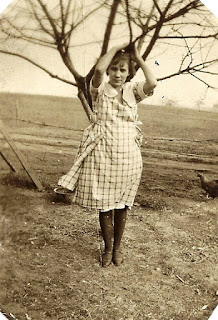 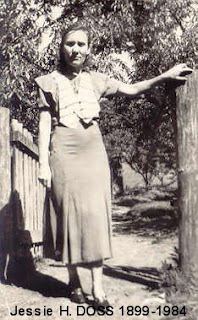 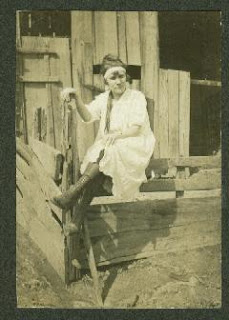 Written by her granddaughter, Vickie Beard Thompson in March 2021.

Posted by Vickie Beard Thompson at Tuesday, March 02, 2021 No comments:

Robert Hosey Davis, my 3rd great-grandfather from my Mom's side of the family.  He was born in 1825 in Wayne County, North Carolina and he died in 1902 in Texas City, Saline County, Illinois.  He was with 5 different women over the years.  I have found marriage dates for 3 of the five.  He also had at least 13 known children.
Posted by Vickie Beard Thompson at Friday, January 01, 2021 No comments:

Some of my Favorite Blogs